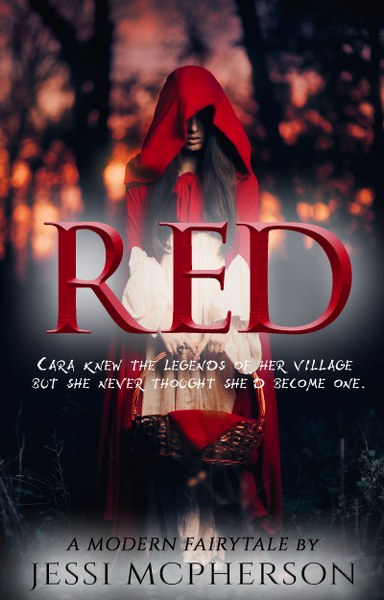 Everyone has read the tale of Little Red Riding Hood… Such a carefree, naïve
girl who fell victim to the wolf and had to be saved by the Huntsman.
I’d like to set that story straight. It all began with a girl, a
curse, and wolf. We all have a hero inside. All it takes is to
believe. Cara knew the legends of her village but she never thought
she’d become one.
Add to Goodreads
Amazon * Apple * B&N * Kobo

“Please help me,” a weak voice said in the distance. Cara ran toward the faint
sound, and on the ground found a young man, no older than she, lying covered in blood and wounds.
“Oh, god. Are you okay?” He was silent. She knelt beside him to check his
pulse. It was there, but it was weak. “Well, hang on. Hopefully Gran has
something to help.” Carefully she lifted him, but it took everything she had to
bring him to the trail. She knew there was no way that she would be able to carry him all the way there. “Please stay alive until I get back,” she whispered to him and took off running. It only took a few minutes to make it the rest of the way to the cottage. “Gran, Gran, please come quick!” she yelled as she headed for the door.
“Dear child, what has you all worked up?”
“I need your cart. There was a young man in the woods, and he’s injured.”
Her Gran looked up at the moon. “Come, child. Show me where.” They
hitched her horse to the cart and Cara led her Gran to where she had left him.
“Was he alone?” Gran asked.
“Yes, and gravely injured.” As they rounded the bend, they could see that he
was still lying on the side of the road.
“Oh dear. He’s been attacked. Come, let’s get him to the cottage and tend to
his wounds. We don’t have much time,” her Grandmother urged.
“He’s coming,” he groaned. Her Gran knelt beside him and whispered
something. He seemed to relax.
“What did you say to him?”
“Only that he was safe and being treated,” she replied. They walked quietly
back to her cottage. “Place him on the cot, dear. Do you have the elixirs your
mother sent?”
“Yes, here in my bag.”
“Good. I need those− also, some wolfbane and jasmine from my shelf.” Cara
grabbed the plants that she had been asked to get and sat beside her
Grandmother, watching her work.
“I don’t recognize him from the village,” Cara said, placing the plants in the
mortar for her Gran.
“No, I don’t suppose he is a villager.”
“Where do you think he came from?”
“I think we will find out, either when he wakes or when the sun rises,” her
Grandmother said.
“What do you mean?”
“You’ll see, child, and it’s about time.”
Cara didn’t understand what she meant. She watched as her Grandmother
pulverized the herbs and noticed she spoke quietly as she did. “What are you
saying?”
“Just a little spell to help with the healing. He is in a lot of pain and won’t heal
until he calms.”
“So it’s true. You are a witch.”
“That’s a strong word, but yes. You are, as well. You come from a long line of
them. We are here to help protect the Hylands. That is why your mother sent you tonight.”
“What do you mean?” Cara asked, wonderment evident on her face.
“She noticed you’ve been changing and slowly coming into your gifts over
the last few months. There’s a lot you are going to learn about, but now we must attend to this man.”
Cara was in shock. Her Grandmother was, in fact, a witch, and apparently, so
was she. She started to shake.
“It’s okay, sweet child.”
“Why didn’t you or Mother tell me sooner?”
“We weren’t sure if you would inherit any gifts. Not every child that is born
into our line has the power. We had to wait.”
She couldn’t believe it. Their attention was drawn to the young man as he
started groaning and speaking frantically. “Lily, Lily run!” he yelled, thrashing
about.
“Come, hold him down while I work, dear.” Grandmother mixed herbs and
covered his wounds. Cara still hadn’t moved. “Cara, snap out of it. Yes, I know it’s a lot to process− and not how we intended to tell you− but right now I need you to focus, or he will die.”
Cara blinked a few times and moved to do what she had been asked. His face calmed slightly as she laid her hands on him, but the anguish was still evident.
She finally took a moment to look him over. She didn’t know why, but she felt
compelled to gaze at his perfect figure. Even covered in wounds, dirt, and blood, his beauty was evident− from the sculpt of his chest to the contours of his face.
She slid the blood-matted hair from his face, and he slightly opened the most
beautiful green eyes she had ever seen. As he gazed into hers, he said, “Please find Lily.” Then he closed his eyes again.
“Who is Lily?” she asked. He didn’t answer. Instead, he started thrashing
again. 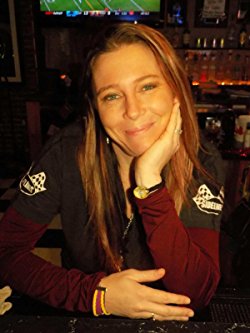 Hi all, I’m JessiMcpherson.
I live in a small town in Iowa right on the banks of The Mighty
Mississippi. I started writing when I was about 10 years old. Almost
every girl has a journal but I not only had fun stories of the day
but poems and short stories that popped in my head. I love fantasy
and romance novels and read almost daily. I like to find my
inspiration in everyday life. That’s one of my goals is to find one
thing every day that inspires me. I grew up an army brats so I have
traveled to a few places over the years. I have two amazing children
and a very amazing husband. They thankfully put up with crazy work
schedules because being a mom and a writer isn’t enough but I am also
the general manager of Sidelines Sports bar in my home town. No
matter how busy I find time for it all. I do hope you enjoy my books
and I look forward to writing more.

#BlogTour The Dragon of Time Series by Aaron Dennis