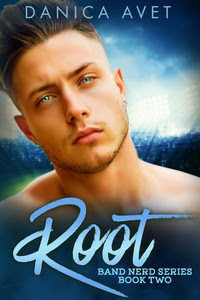 Amazon
ARe
Barnes
Kobo
Until I joined the Marching 300 at Sauvage State University, I was just too-tall, tuba-playing Lena Leblanc. But college changes everything. Suddenly I have friends, and they won’t let me dodge the attraction I have for hulking, Viking-like football player Anders De Groot. He makes me feel; makes me believe that I’m more than a burden to others. That I’m more than just Lena. And for a girl whose mother checked out years ago, that’s the scariest feeling of all.
Before I met Lena, all I had was school and football; study and stadiums full of spectators cheering for “Root!” Now, I can’t get her out of my head. She’s everything I could possibly want in a woman and I need to prove to her how good we’ll be together. I need to show her that, no matter what, she’s perfection. My perfection. And I’ll stand my ground to make sure nothing ever hurts her. Not even her family.
See what I mean? How can he even be real? So impossibly sweet and hot? But with my stepfather threatening us, I’ll have to learn how to step up and fight for what I want. Otherwise I’ll lose the greatest thing to ever happen to me.

Danica Avet was born and raised in the wilds of South Louisiana where mosquitoes are big enough to carry off small children and there are only two seasons: hot and hotter. With a BA in History, she figured there were enough fry cooks in the world and decided to try her hand at writing.
Writing is how she gives the voices in her head a way out. They speak to her constantly wanting their stories told and she does her best to accommodate them.When she isn’t writing, working, or contemplating the complexities of the universe, she spends time gathering inspiration from her insane family, reads far more than any sane person would want to, and watches hot burly men chase an oblong ball all over a field.
Author Media Links
Website

#BlogTour Must Be Wright (The Wrights Book 3) by Skye Jordan